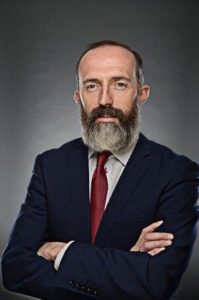 Maurice has a broad litigation practice with a strong emphasis on personal injury, family law, debt recovery and commercial litigation.

Maurice also assists an ever increasing number of corporate clients with property and business related disputes. He is vigorous in the prosecution and defence of these claims while always remaining acutely aware of the commercial practicalities which usually underpin these matters.

Maurice studied Law at University College Cork before qualifying as a Solicitor in 2002. He set up the firm of Healy O’Connor Solicitors LLP in 2009 to focus on litigation after working for a number of law firms in Cork City and County.

Acting in High Court proceedings on behalf of a global exports firm owed considerably amounts of money by an Irish liquidated company.

Acting in High Court injunction proceedings concerning the removal of a fishing vessel from Irish waters.

Acting in the context of several high-stakes matrimonial divorce disputes including the tracing of international assets.

Advising a UK company on the recognition and enforcement of a significant foreign judgement in the jurisdiction of Ireland.

Advising the owners of a shopping centre on a dispute with the lessees and dealing with the resultant High Court litigation.

Acting for a Middle-Eastern company in a dispute with an Irish software Company in relation to a serious breach of contract. The contract related to the provision of complicated software for use in the company’s product.

Acting in High Court judicial review proceedings concerning the constitutionally of legislation affecting the rights of an individual.

Advising a corporate client in respect of alleged negligence by a bank and acting in the subsequent High Court proceedings against the bank seeking damages for serious financial losses.

Advising the board of directors of a corporate client in respect of the exit of a number of directors.

Acting in High Court medical negligence proceedings against a hospital relating to alleging loss of sight.

Acting in High Court wrongful death proceedings against a doctor and hospital.