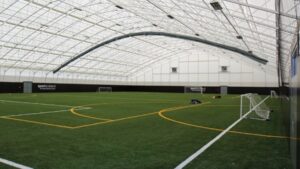 The six-year-old boy was attending a birthday party at an indoor football pitch when he was struck by a falling goalpost.

A young boy who claimed he was struck by an unsecured falling goalpost has been awarded €60,000.

The incident happened six years ago at a birthday party, in a Dublin complex.

Mr Justice Garrett Simons said that the boy was lucky to make a full recovery, from what could have been life-changing.

The boy, now aged 12, had through his mother, Paula Hannon, sued Indoor Football Ireland Ltd. They operated the sports facility at that time.

He was allegedly struck and fell to the ground, lying face down. The boy had to be carried to his mothers car and transported to Temple Street Children’s University Hospital. It was found that the boy had a posterior chest wall injury,  and was later diagnosed with a collapsed upper lobe of his left lung.

He was admitted to hospital for a procedure under general anaesthetic, and in 2017 he had to have another procedure.