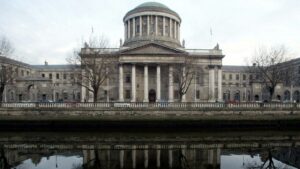 The girl was four when she fell over a black rubber mesh mat which was allegedly protruding from the grass at her local playground, it was claimed.

A young girl who tripped in a playground and suffered a cut to her forehead has settled a High Court action for €70,000.

The girl was four when she fell over a black rubber mesh mat in the playground as it was allegedly protruding from the grass.

Her mother sued Dublin City Council over the accident at the playground  in September 2018.

The girl impacted her head against the edges of the slide and sustained a burst laceration to the left side of her forehead.

The laceration had to be repaired in hospital while the girl was under general anaesthetic.

The child has been left with a 4cm scar over her eyebrow. It was permanent in nature and obvious at a conversational distance but was expected to fade over time.

The Counsel said a full defence had been filed in the case.

The Judge noted liability was at issue in the case. Dublin City Council contended an unknown third party had interfered with the mat.

View the full story at IrishIndependent