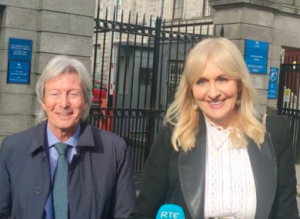 Facebook has apologised to broadcaster Miriam O’Callaghan over fake ads that used her name and image without permission.

The Prime Time Broadcaster received an apology as part of the settlement of her High Court action.

In the settlement agreement, Meta Platforms Ireland (formerly known as Facebook Ireland) have agreed to establish an additional scam ad reporting tool. It will allow Irish users to submit reports on misleading adverts to a specialist team within Facebook for review.

In her legal action, as well as a permanent injunction restraining the publication of the adverts, Ms. O’Callaghan had sought damages for malicious falsehood, unlawful appropriation of personality, various breaches of her constitutional rights and defamation.

Speaking outside court, her solicitor Paul Tweed said that the legal process had been lengthy and challenging, but had been successful, particularly in relation to the introduction of the new reporting tool.

Ms. O’Callaghan said: “First and foremost the ads are down, they are gone. That was the most important thing, that I got them down, to protect my name, to protect my reputation”

She said it was “a good day” following a 5 year battle over the misleading ads. She said it had caused her distress, and had damaged her reputation.

View the full story here on The Journal