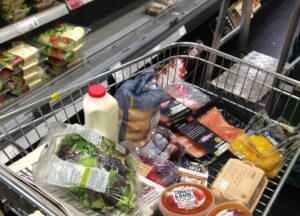 So there you are walking around the supermarket because it’s your turn to shop. You’re wondering how long this will actually take, because it’s been a while.

It’s not that you hate shopping or anything. It’s certainly better than hanging out the washing, for instance.

You remember you are both trying to be healthy this week so you try to avoid the aroma of fresh baguettes and reach instead for a whole-wheat breaded product by McCambridge.

You then buy some crisps which more or less defeats the purpose of buying healthy bread. Oh well.

It’s some time later back at the house when your wife comments on your choice of bread with the throwaway remark: “Oh, I didn’t realise Brennans made whole-wheat as well; how nice”.

The above scenario is what gave the judge in deciding the case of McCambridge v Brennan sleepless nights.

Some background first: McCambridge has a third of the market share in Ireland for the type of bread in dispute. Brennans has a fifth.

The shape, size and colour of the actual loaf manufactured by both companies can hardly be distinguished.

The legal wrangling arose because in January 2011 Brennans changed the packaging of its loaf, which ended up looking like McCambridge’s.

What we are talking about here in case you haven’t seen the packaging, is re-sealable, transparent bags with dark green panelling to the front. McCambridge sought an injunction stopping Brennans from copying its packaging, claiming that its rival was passing off its product. Brennans said: “Oh no we’re not.” McCambridge said: “Ah yes, actually you are.”

My friends Mark and Peter think that if you do not register your trademark, you are unprotected by the law. They are wrong.

What they don’t know is that the old tort law of passing off will apply to unregistered intellectual property rights. Pardon?

Well, you see, in Ireland, we have a common law system, so we look to what judges decided in cases in the past to guide us.

Essentially, Peter can’t pretend the cream eggs he sold to Mary are the same as Mark’s, because if he does Mark will sue him to protect the goodwill of Mark’s shop. It’s a nice shop. Sounds easy for Mark to succeed, but it’s not. Mark hasn’t yet won.

He has to show that he has goodwill in his cream eggs, that the misrepresentation made by Peter is likely to fool Mary into buying his cream eggs and that there is damage to Mark’s goodwill as a result.

In the McCambridge case, the judge said the first argument was easily satisfied. There was goodwill built up over a long time.

But was there misrepresentation? The courts have made it clear in the past that there must be a likelihood of confusion between Mark and Peter’s products.

The judge said he would not look at whether Brennans intended to mimic its competitor’s packaging, but rather, whether objectively speaking, a reasonable member of the public would be confused into buying the Brennans loaf in error believing it to be the McCambridge loaf.

The judge then said the court would put itself in the shoes of the reasonably prudent shopper who isn’t in a hurry and who isn’t looking at every item closely. Well that’s definitely me then.

Then the judge looked closely at the first impression of the shopper who is likely to be confused. And citing an earlier case, he said it wouldn’t be much good if you noticed your mistake later on.

Finally, and most interestingly, he took the circumstances around buying bread into account. He said he knew breads get tossed around and that we do not apply close scrutiny when buying bread.

He must have been watching me agonising between a much-loved Irish brand and a product endorsed by a certain English football pundit.

Spoiler alert in case you intend reading the full judgment — the judge sided with McCambridge and granted the injunction. Next stop, Supreme Court.

View the Irish Independent article here
« Back to News