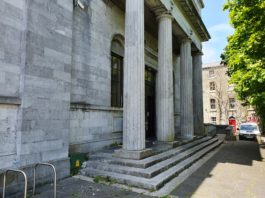 Defective chair caused woman to injure her abdomen, back and buttock when she fell and hit the ground. She won despite the CCTV footage showing she did not impact the ground during the incident.

Ms. Dudgeon was awarded €16,400 in damages at Galway Circuit Court after a contested civil action. She says she suffers ongoing lower back pain after the incident at Supermacs.

Supermac’s Ltd did not have to provide footage of the incident to Ms Dudgeon. Even though it was sought as part of the discovery process.

Supermacs argued that providing the footage to the plaintiff would allow her to “mend her hand” in circumstances where the footage may not support her version of events.

Supermac’s had already admitted the chair broke and was defective so the CCTV footage was not necessary.

She informed a member of staff at Supermacs about what happened and continued with her meal. She told the court that later, she began to feel a twinge in her lower back and lower right buttock.

Ms Dudgeon told the court that she developed a pain in her neck a few days later. The incident happened on Friday, January 6, 2017, and Ms Dudgeon attended her GP on Monday, January 9. Her GP sent her for an x-ray and prescribed pain medication.

When asked if she was certain she hit the ground, she said: “That’s what I thought happened.”

She told Mr O’Donnell all she remembers is “jolting” and lurching to the left when the seat broke. She added: “I blanked.”

Footage shown to the court showed Ms Dudgeon sitting on the seat and momentarily lurching to the side, but she remained on her feet and stood upright immediately.