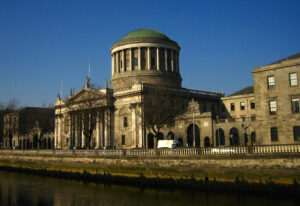 The woman claimed the footpath had been designed and constructed in an unusual way.

A woman has been awarded €58,741 by the High Court after she fell stepping off a pavement.

Ms Keane, from Co Roscommon, sued Donegal Co Council after she fractured her elbow in the accident in 2018.

She stepped onto a raised kerb which she believed was flush with the pavement.

However, unknown to her, there was a double step coming down from the raised kerb and she fell. She sustained a significant injury to her right knee, the court heard.

She claimed the council was negligent and breach of statutory duty in the design, construction, makeup, maintenance, upkeep, and warnings of the footpath. The council denied all allegations.

Ms Keane was brought to hospital by ambulance following the accident. She immediately underwent surgery for a fracture to her elbow.

She experienced severe pain and restrictions in her daily activities for many months and was unable to return to work or to her own home.